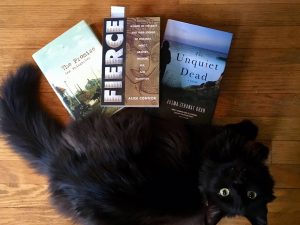 I didn’t realize until I took this photo (Mycroft tried to steal the scene!) that the authors all have first names beginning with “A!”

Here are my three OPBs this month–a book I’ve read, a book I’m reading, and a book I’m looking forward to reading.

A book I’ve read: The Promise, by Ann Weisgarber 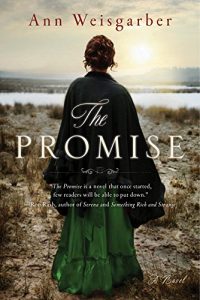 From the cover copy: “1900, Catherine Wainwright flees her fashionable hometown of Dayton, Ohio in the wake of a terrible scandal. Heartbroken and facing destitution, she finds herself striking up correspondence with a childhood admirer, the recently widowed Oscar Williams. In desperation, she agrees to marry him, but when Catherine travels to Oscar’s farm on Galveston Island, Texas–a thousand miles from home–she finds she is little prepared for the life that awaits her… Meanwhile, for Nan Ogden, Oscar’s housekeeper, Catherine’s sudden arrival has come as a great shock… And when the worst storm in a generation descends, the women will find themselves tested as never before.”

Why I loved it: I thoroughly enjoyed this novel for the journey it took me on–in time and place, but also emotionally. Ann deftly tells the story through both Catherine and Nan’s points of view, alternating between them with first person narration, yet bringing each woman’s voice distinctively, clearly to life. As a writer, I was in awe. As a reader, I was riveted!

A book I’m reading: Fierce: Women of the Bible and their Stories of Violence, Mercy, Bravery, Wisdom, Sex and Salvation, by Alice Connor

The subtitle says it all, but here is more detail from the cover copy: “Women in the Bible–some of their names we know, others we’ve only heard, and others are tragically unnamed. Pastor and provocateur Alice Connor introduces these women and invites us to see them not as players in a man’s story–as victims or tempters–nor as morality archetypes, teaching us to be better wives and mothers, but as fierce foremothers of the faith.”

Why I’m loving it: I usually don’t read nonfiction (other than memoir, personal essays, or for research), but I’m savoring these essays, allowing myself time between each to consider what I’ve read. They are thought provoking, surprising, and at times laugh-out-loud funny.

A book I will read:The Unquiet Dead by Ausma Zehanat Kahn 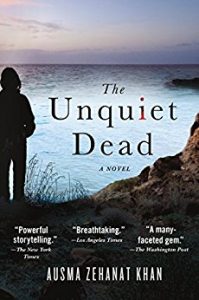 From the cover copy: “Despite their many differences, Detective Rachel Getty trusts her boss, Esa Khattak, implicitly. But she’s still uneasy at Khattak’s tight-lipped secrecy when he asks her to look into Christopher Drayton’s death. Drayton’s apparently accidental fall from a cliff doesn’t seem to warrant a police investigation, particularly not from Rachel and Khattak’s team, which handles minority-sensitive cases. But when she learns that Drayton may have been living under an assumed name, Rachel begins to understand why Khattak is tip-toeing around this case. It soon comes to light that Drayton may have been a war criminal with ties to the Srebrenica massacre of 1995…”

Why I’m looking forward to it: The premise is intriguing, and I’m eager to read a mystery that also explores timely cultural themes while pulling from the background of the Bosnian War. Then too, my hometown (fashionable Dayton, Ohio!), was the site of the Dayton Accords in November 1995, the peace agreement (later signed in December 1995 in fashionable Paris, France) that put an end to the Bosnian War. The Dayton Literary Peace Prize, held annually, was inspired by the Dayton Accords.