Please note that this is a throwback to my Sanity Check humor column that I wrote for the Dayton Daily News.  Since I wrote it several years ago, please note that this writing retreat did NOT take place during the past six months of COVID-19! But, like many writers, I love solo writing retreats. Even though I have a lovely home office, there is just something about going off on one’s own, away from familiar surroundings, yet to inspiring and peaceful surroundings, to get a lot of work done. I am also well known in my family for my, um, lack of any sense of direction. It’s not that I have a bad sense of direction. It’s more like the Good Lord just decided not to install a sense-of-direction at all in me.(Perhaps I’m compensating a little for that by giving my characters Lily and Marvena outstanding senses of direction…)  I think I did, however, get a good sense of humor. Let’s see: 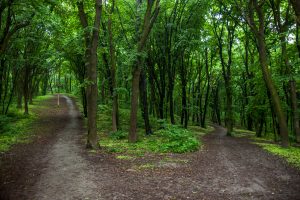 A few weeks ago I packed up the lap top and headed off to stay at a state park by myself for a writing retreat. The idea was to get away from everything else in life and focus on just writing for a few days.

But as idyllic as it was to hole up to write in a room with a lake view, after awhile I needed a break. So, I went hiking.

I started a little late in the evening, and became so entranced with observing deer, turkey vultures, and a huge raccoon the size of a bear cub, that I hiked longer and further than I’d intended.

When twilight came, I turned around to head back up the path to the lodge, which was working out just fine… until the path split in a V.

I stopped. Earlier, the path hadn’t suddenly widened to give me a clue that I’d passed a point where two paths converged.

I whipped out my cell phone to double check I had coverage, just in case I got really lost and needed to call for help. There was just enough light left for me to discern that I had no cell coverage.

Now, lest the fact that I was hiking fool you into thinking I’m nature-woman, let me assure you I’m not. Hiking, to me, is usually a leisurely walk with other people on well-marked trails in our local metro parks. I have no training or knowledge beyond that about finding my way around in nature.

So I stood there for awhile, trying to remember something from the hike thus far that would help me. Or something about moss and the north side of trees… which would have helped only if I knew which direction I needed to go to get back to the lodge.

And then, these words drifted through my mind: “Two roads diverged in a wood, and I— I took the one less traveled by…” from Robert Frost’s poem The Road Not Taken.

And suddenly I knew just what to do… the opposite of the choice made in Frost’s poem. After all, wouldn’t the path more traveled by be more likely to lead back to the main path and the lodge?

Soon, the lodge came in sight. I had to smile. Not just out of relief, but because it seemed so fitting—poetic, even—that a writer on a writing retreat would save herself from getting lost by knowing a few lines of poetry… knowledge that “made all the difference.”