For me, one of the many joys of writing historically-based fiction is discovering surprising facts about how people dealt with issues in the past. 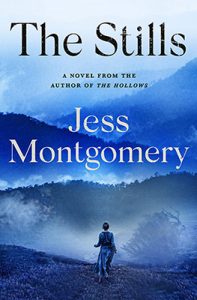 One of the recurring characters in my Kinship series, set in 1920s Appalachia, is a young girl named Frankie. She is the daughter of Marvena, a union organizer and later deputy to Sheriff Lily Ross. Frankie is a talented singer but she also has a problem: she has asthma. And though understanding of asthma as a disease was increasing in the 1920s, treatment was still quite rudimentary by our standards. The peak flow meter, crucial to measuring respiratory function and thus managing respiratory illness, would not be developed until the 1950s and would only become commonly used by patients and doctors alike in the 1970s.

But in the 1920s, options for treating asthma were severely limited. The disease has certainly always been part of the human experience. Hippocrates (born 460 BC-died 370 BC) first used the Greek word for “breathing noisily” to describe respiratory distress; it’s from this word that we get the word “asthma.” He also linked asthma to environmental factors. Before him, descriptions of breathing difficulties that we’d recognize as asthma symptoms can be found in ancient literature.

Inhaling steam as a treatment was first used in the 1770s. It’s from this tradition that Nana, Marvena’s mother-in-law and Frankie’s step-grandmother, derives her treatment of boiling herbs and having Frankie inhale the steam.

But these treatments have little effect, and so in THE STILLS,  Marvena is eager for her daughter to try the newest asthma treatment: asthma cigarettes. These cigarettes weren’t simply tobacco (though smoking regular tobacco cigarettes was sometimes also encouraged for asthmatics), but a mix of various medicines and herbs that would supposedly help with breathing difficulties. 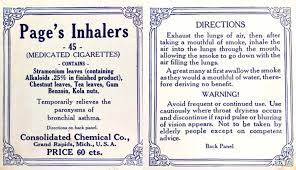 When I chat with book clubs about THE STILLS, the inclusion of asthma cigarettes as part of a subplot almost always comes up. Readers are amazed that these were really prescribed–but nearly one hundred years ago, they were.

I included this subplot, along with other medical issues for characters (diabetes type I and cancer) in The Stills because I wanted to explore how people dealt with medical issues, and the frailty of life, nearly 100 years ago. When I started writing THE STILLS, Covid-19 was awaiting us in the future. By the time I was finishing up the novel, Covid-19 had just become a global pandemic.

It’s easy to look back at obsolete treatments like asthma cigarettes and shake our heads in wonderment at how ridiculous the treatment now seems. But I think a better take-away is that scientific and medical understanding of human conditions–disease or otherwise–is ever-evolving. Scientists and medical experts do the best they can with the knowledge they have, but the quest for more knowledge–and adjusting how we respond to disease and illness and simply what it means to be human–must always evolve and change as guided by new knowledge.

WANT MORE BONUS CONTENT, GIVEAWAYS,AND UPDATES? SUBSCRIBE TO MY FREE E=NEWSLETTER BY CLICKING HERE (AND GET EXCLUSIVE BONUS CONTENT FROM THE FIRST NOVEL IN THE KINSHIP SERIES)!