My Kinship novels are set in the mid-1920s, and Prohibition was national law from 1920-1933, so of course Prohibition is a prominent thread woven into the background of the first two novels in the series. 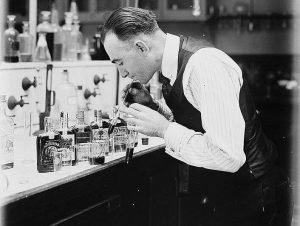 (Caption: A Federal Chemist at Work; Library of Congress)

But, as you might imagine in a novel entitled “The Stills,” Prohibition comes to the forefront of the plot in this newest outing, co-narrated by series protagonist Lily Ross and by Fiona Vogel—new wife to Lily’s nemesis, bootlegger, and gangster George Vogel. When George brings big-time bootlegging into Lily’s county, she can’t ignore the crime that comes with it, on a much bigger scale than a still here and there.

And she also can’t ignore that residents seem to be getting ill from tainted alcohol. But did the government truly purposefully poison drinker during Prohibition? Well, I did a bit of research to find out. And then I wrote an article about it, for History Reader. Click here to get the scoop!