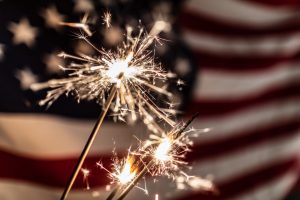 4 to all who celebrate! I wrote this piece, from my former Sanity Check column, when our daughters were young girls. Now they’re grown women, but I think the column still has a relevant message. I hope you enjoy it!

Quick–which comes to mind first when you think of July 4? Fireworks? Or parades?

Personally, I love both.

But there was a time when that wasn’t quite true, when I would tolerate a parade, but really looked forward to the bang, sizzle, pop, ooh-ahh of fireworks during the cooler dark of evening.

Parades, I thought as a kid, were, well, kind of boring. Even the Macy’s Thanksgiving Day parade, after a few larger-than-life characters had floated by on our tiny (by today’s standards, anyway) TV screen, became dully repetitive.

Of course, I tend to be a person who likes pageantry of all sorts (parades, fireworks, sports) much better in real-life than captured on TV. But even the first parade I recall seeing in person–a Mardi Gras parade, while living in New Orleans as a newlywed–seemed a little, well, disappointing. Now the pageantry outside of the parade was a completely different story… but I digress. The point is that I figured if seeing even a Mardi Gras parade in real life couldn’t make me a parade fan, then I’d never become one.

But my attitude toward parades started changing after my husband and I had kids. Suddenly, I really wanted to make sure our kids went with us to community parades. It seemed important for me to point and say, “Look kids! Firefighters!” Or “Look kids! The football team! The band! The Shriners in miniature cars!”

Never mind that our kids found parades a little, well, boring, and soon became restless for the bang, sizzle, pop, ooh-ahh of fireworks. (One exception: the Sorghum Festival parade in West Liberty, Kentucky, held each September, during which copious amounts of candies are tossed willy-nilly into the crowd, with tossers taking particular care to aim at little kids’ feet.)

But of course I never let my kids’ protestations stop me from nudging them toward what is good for them. Such as insisting that they put not just one, but TWO, spears of asparagus on their dinner plates. And, eventually, not only attending but actually being IN parades!

So, for several years, despite protestations of weariness, they marched in a spring festival parade with their Girl Scout troop, because I was both their insistent mother and their fearless Girl Scout leader and I Said So. At first, I tried explaining how much it would mean to people from their community to see them in the parade. But this was about as convincing as explaining the nutritive value of asparagus spears. So, eventually, I just told them to march on and that they’d somehow miraculously regain enough energy to enjoy the festival after the parade. (And, not really miraculously, they always did.) Since then, they’ve participated, whine-free if not joyously, in other parades for school activities.

Now, they’ve out grown reasons to be in parades. Well, temporarily, I’m sure. I hereby promise to only smile with kindness and understanding–not laugh–if they’re ever Girl Scout leaders shooing their charges along a parade route. But for now, though they’ll politely watch a parade, I think they still really prefer the bang, sizzle, pop, ooh-ahh of fireworks.

And I still love that too.

But I have also grown, over the years, to appreciate just as much the march, wave, smile, ooh-ahh of a homegrown parade, of people coming together to celebrate all the groups, individuals, teams and organizations that work together to make a community.