My email newsletter subscribers (sign up here if you haven’t already!) receive bonus content: letters Daniel wrote from the Great War Front to Lily and Marvena.

Though THE WIDOWS takes place in 1924/1925, Daniel Ross is a veteran of the Great War (or, as we call it from our perspective in time, World War I), and his letters end up providing a crucial connection for Lily and Marvena to get help in saving their community from another bloody conflict between striking mine workers and company management. 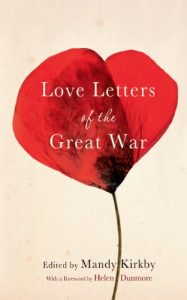 One of the books I consulted when researching letters from the era was “Love Letters of the Great War.”

Recently, as my husband I sorted through boxes from his parents’ old home, after my dear mother-in-law passed away, we came across two letters from one of her uncles, who proudly signed his letters “Private John Gray, 1st Battalion, Battery A, Motor School.”

One is to his married sister (my mother-in-law’s mother), and another to his parents, in which the salutation is “Dear Folks.”

They are such simple letters–wondering how everyone in the family is, commenting on food, on which “boys” or “fellows” he’s serving with from their town. In the letter to his parents, he adds a p.s., asking for some money from “dad,” which I admit made us both chuckle. (Kids!) I’m enchanted by the simple addresses–his family lived in such a rural area, that all it took was a name and “Rural Route” number for the postman to know where to bring the letters. 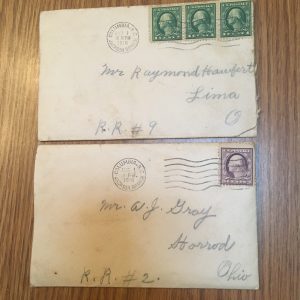 What really struck me about the letters is that he writes to his parents, “I have got the job dad wanted me to have. But I have got to go to school for awhile…when I get this learnt, I will have something.” Ah–John dreamed of learning mechanics, coming home from the war, and using those skills to build a life for himself.

Private John Gray never saw battle, for he died in the influenza pandemic.

I find these simple letters so precious and touching, for the bit of hope expressed in them, for their simplicity. Life is fragile and unpredictable–a reminder to hug our loved ones, and be as kind as possible to all our fellow humans.