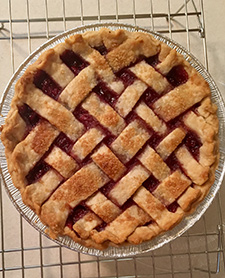 e’re lucky enough get together with our adult daughters most Sunday evenings–though one lives about as far south from us as possible, and the other about as far west. Let’s hear it for the power of Skype! And Google Hangouts! (Whichever one is working better any given Sunday.)

This past Sunday, our daughters teased me about finding what they call my “pie obsession.” Wwwhat? I don’t have a pie obsession, I protested.

My husband and daughters laughed. “Most people say ‘bless you’ when someone sneezes,” they teased. “You say, ‘would you like a get well pie?'”

Truth be told, that’s only a slight exaggeration.

The conversation brought to mind a column I wrote a few years ago, and I’d like to share it here with you. (For the record… I have sense bought a pastry blender. A practical tool which now resides in the kitchen drawer devoted to my pie-making gadgets. OK, fine. Maybe I am slightly pie-obsessed.)

My oldest daughter and I decided to make an apple pie together a week or so ago.

Until we started to peel the apples. 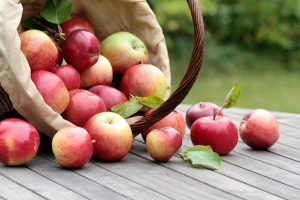 As usual, I got out the paring knives, and began paring an apple, and expected my daughter to do the same.

Instead, she opened the utensils drawer.

“What are you doing?” I asked.

“Looking for the vegetable peeler,” she replied. “Just look at all the waste you’re making with the paring knife!”

“But it’s for VEGETABLES!” I exclaimed.

My daughter just sighed… and did it her way. And danged if the little stinker didn’t manage to peel her apples leaving more apple intact.

“My way’s quicker,” I said, a bit petulantly. She smiled.

My rosy-glow future picture of “this is how mom taught me…” was getting a bit shadowy.

We then mixed sugar, cornstarch and cinnamon, and poured it on the peeled-by-various-methods apples. I reached for a wooden spoon to stir the sugar mixture into the apples, but as I did that, my daughter picked up the apple bowl and started bouncing the apples.

“What are you doing?” I asked, holding the wooden spoon out to her.

“This will distribute the sugar more effectively.”

And… she was right. (Although I think if I tried that technique, my apples would bounce right out of the bowl.)

My lovely future picture of “this is how mom taught me…” was starting to fray on corners and edges. 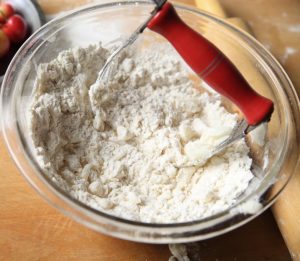 Next it was time to mix the crust. I handed her two table knifes, and she started using them, as I’d taught her, slashing cross-wise.

She sighed. “I’ve never understood why we don’t just buy a pastry mixer.”

“Why have kitchen tools around you don’t really need,” I said. And yeah, I sounded grumpy.

And then I saw her teasing smile.

And as we made the crust—with my technique—we both laughed and laughed. It was the most we’d ever laughed, making a pie, and we’ve laughed plenty over many pies.

When the pie came out of the oven, it was beautiful. Looking at it, tasting it, no one would know it was made with a mix of hand-me-down techniques and new techniques.

So now my lovely future picture has my daughters making pies with some of the techniques I’ve taught them, some of their own techniques… and that picture makes me smile. The important part of that picture is carrying on a tradition—not specific techniques.

On the other hand, if we’re ever blessed with grandkids, when they’re old enough, I’m teaching ‘em how to peel apples with a paring knife…