I arrived at Bouchercon 2019 on October 30 and returned from it four days ago–and my head is still a bit in a Bouchercon whirl. 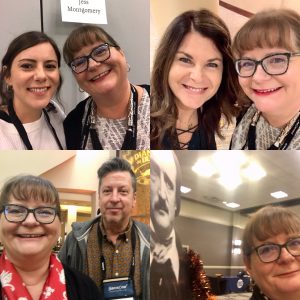 I loved seeing old friends, making new friends, and spending time with my terrific Minotaur publishing team. I even met, for the first time in person, the brilliant designer of my website and email newsletter, as well as other promotional items.

And I was so honored to be on a panel with a superb moderator and brilliant authors (links provided so you can look up their work, too): Carrie Smith, S. J. Rozan, Keir Graff, Shawn Reilly Simmons, and Gary Phillips.

We were asked to share a memory of early inspirations that drew us into writing, and writing mysteries in particular.

Here was mine, with a bit more detail. (It’s always good to be as succinct as possible on panels, I think, in consideration of both the audience and fellow panelists!) 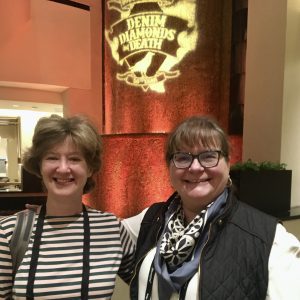 One day when I was twelve or so, a box arrived from my paternal Grandmother Lou–addressed to me! It wasn’t my birthday or Christmas or another gift-giving occasion. And Grandma, though quiet and kind, was generally not the doting type. She lived in Eastern Kentucky, in a small Appalachian town, a widower from before I was born. My great-grandmother (who was in her 90s and would live to 102) lived with her. Grandma didn’t drive, and so she walked to church and to her part-time job (which may have been a volunteer position, but I’m not sure) at the Save-The-Children Federation Thrift Shop.

I opened the box, which contained two items from that thrift shop.

One was a pair of yellow patent-leather Mary Jane shoes which, I swear, glowed from within the box. At least, that’s how I recollect it. They were, to my twelve-year-old eyes, the height of fashion, and probably started my interest in fashion.

The other item was a mystery novel, “Mystery on Hopkins Island” by Elisabeth Ogilvie, written for what we would now call the young adult audience. Who knows how it made its way to the thrift shop. By the time it made its way to me, it had been out well more than a decade, and was rather tattered.

Sure–I’d read Nancy Drew books, and loved them. And I would go on to read “Harriet the Spy” thirteen times–in a row, literally, because I kept count–when I was (yes) thirteen. 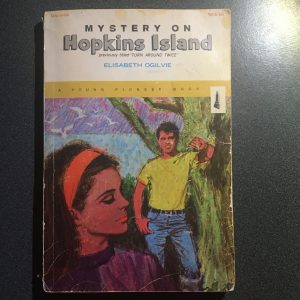 But “Mystery on Hopkins Island” was a major influence on me as a writer and as a person, but so subtly that I didn’t realize it until well into adulthood.

The premise is that Bun is an almost-seventeen-year-old writer, who enters a writing contest and wins the grand prize–a choice between $3000.00 (which could pay for much of her college! Keep in mind this was published in 1962) OR… an island off the coast of Maine. Of course, she chooses the island. Her ‘forward-thinking parents’ end up allowing her to go to the island with her younger siblings, with whom she squabbles quite a bit, though they all love one another. In Maine, she meets a handsome “lobsterman,” (he’s almost-eighteen-years-old) and of course develops feelings for him. (He almost kisses her! He smokes a cigarette! Very sophisticated! Again–1962.)  Bun and her siblings solve a mystery which can be boiled down to a Scooby-Dooby-Do precursor of… if it weren’t for those meddlin’ kids, the shady art dealer would have gotten away with it!

I re-read the novel before Bouchercon. Yes, I still have the book. It’s moved with me all these years. The pages are dry and yellowed, and the cover is about to fall off, so I handled it carefully. And I read it slowly and savored it.

At the end, I thought, as I have before, that no wonder I loved it. Here was a story that gave me, at twelve, the notion that writing can lead to magical experiences–winning an ISLAND! Having adventures! And… romance! Here was a story that introduced me to the notion of a much wider world. At the time, I knew two places from in-person experience: my hometown in Ohio, and my parents/grandparents tiny village in Eastern Kentucky. The notion of Maine in and of itself was exotic. An island off its coast? Thrilling! And a family with “forward-thinking” parents who got along, plus siblings, too? Ahhh. That sounded so lovely.

You see, my grandmother (and anyone who would listen) already knew I wanted to be a writer–because I kept telling everyone that. And scribbling stories, and reading non-stop. My grandmother also knew, though she’d never say it directly, that my home life was, in a nutshell, chaotic. I didn’t have any siblings at home to share that with, so I turned to books to escape.

So when she gave me “Mystery On Hopkins Island,” I believe she was thinking beyond–hey, this particular grandkid loves to read. I’ll just tuck in a book. I believe she knew just how much it would resonate with me.

Those notions–of writing leading to surprising and interesting places (metaphorical islands), and the excitement of a good mystery, and the fun of a romance and close family members, and that the world is a wide, fascinating place–were seeds my grandmother planted in me through that slim, lovely story. In re-reading it again, I was also struck by how well-written it was, and how evocative the descriptions of setting were–two elements I still seek in reading and aspire to in writing.

I think Grandma Lou knew exactly what she was doing.

And now, as a writer myself, it is poignant to think about how one just never knows how one’s work may touch readers, and how that reading experience might ripple forward in lovely ways.

Elisabeth Ogilvie passed away at age 89, in 2006. But her work lives on in me, and I’m guessing, in many other readers too.