I’m blessed and honored to be out west with our daughter to help her pack and prepare for her next duty station. My presence is mainly dictated by the need to help her drive her car back to our home state, where she’ll turn her car over to her little sister, at least while she’s at her next station. 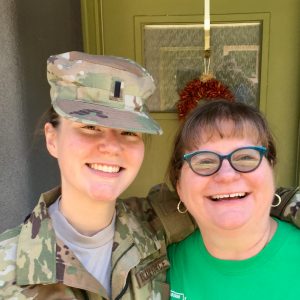 Well, and also, to be honest, because I want to hang out with her before her next assignment.

In sorting out the kitchen, we realized that between her and her roommates (who’ve already moved to their next assignments), there were five partially-eaten jars of jams and jellies.

Being the thrifty sort, and anticipating a multiple-day drive across about two-thirds of the U.S., we decided we’d try to make hand pies filled with the jellies and jams–sort of a latter-day Hostess fruit pie.

Well, and also, to be honest, to divert some of our nervous energy into baking.

I’ve attempted hand pies once with fruit filling and a traditional pastry crust, but the crust fell apart. On the other hand, I’ve used a hot water crust to make meat pot pies–a hot water crust isn’t flaky, but it is sturdy.

So, I thought, why not make a hot water crust, but leave out the salt, and substitute a small portion of the flour with sugar. Then bake, cool, and glaze with a mix of a bit of water and powdered sugar. 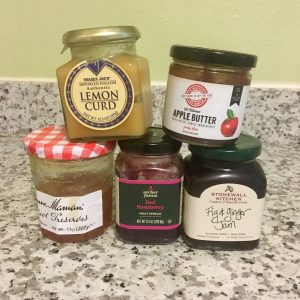 As with a traditional pastry crust, I follow a ratio for hot water crust. In this case, I made the quantity of  hot water crust dough based on how much butter and shortening my daughter had left over in her fridge. And of course she has a food scale for measuring quantities for baking.

Hot water crust (sweetened for jelly or fruit hand pies. You could also use leftover pudding for a filling, too!) 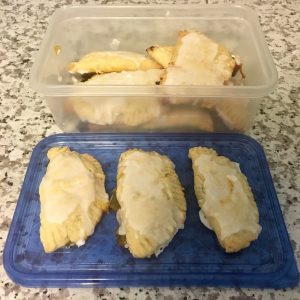 For the jelly/jam hand pies: