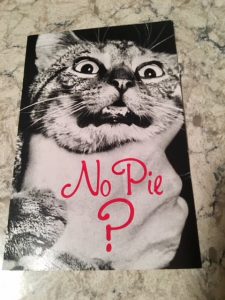 Among my family and friends, I’m known as the “pie lady.”

I love pie so much that I keep this post card up on my refrigerator.

I make pies for parties. For dinner gatherings. And to bring to people when they are battling illness.

I once brought a pie to a New Years’ Eve part. The hostess hollered, “Jess is here–and she brought PIE!” She is a good friend, and well acquainted with my pies.

But one of the guests, who I’d never met before, looked skeptical. “What kind of pie is this?”

Then he had a slice.

His eyes grew wide at the first bite. Then his eyes nearly rolled back in his head. “Oh… oh…” He was so close to tears, I suddenly worried that I’d accidentally spilled vinegar in the pie? (No offense to vinegar pies, but this was a sugar pie.) But then he moaned appreciatively, and said, “This… this tastes like childhood! This takes me back to… childhood!”

We quickly became friends after that.

Love and friendship and pie

I’ve made spinach quiche for a friend who had breast cancer. She swears my spinach quiche (yes, quiche counts as a savory pie) has healing properties, and was for a few da 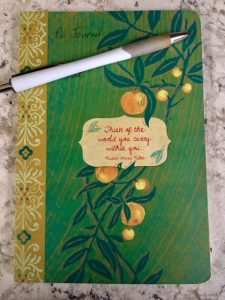 ys the only food she wanted. Another friend, also battling breast cancer, said almost the same thing about my chicken pot pie. I took a French apple pie to a friend as a house warming gift. She’d moved right before Thanksgiving and served the pie at that dinner, grateful dessert was covered for visiting family. That was two plus years ago. She says her father still talks about that pie. I keep a simple pie journal, in which I note each pie made, date, for whom/occasion, perhaps some thoughts about the person receiving it or the occasion that warrants it, and notes to tweak the recipe.

I’m thrilled by these compliments, of course, but my pies are pretty simple, so I’m always a little stunned by the rave reviews they get. But when I think about it, I realize the positive remarks result not just from how my pies taste, but because I’ve given something homemade, one-of-a-kind.

When I’d bake with my daughters when they were little, we developed a little ritual–always hug somewhere between mixing up the cookies/pie/muffins and placing the item in the oven. That way, I’d say, some love would bake into the goodies. I think, now that they’re adults, they’ve caught on that the ritual was my way of giving (and getting) a hug. But we still do it, and maybe there’s something to it.

I have very specific reasons, as a writer, why pie-making has become my hobby, an avocation even:
1. A novel can take a year. Or, years. A pie takes about an hour, hour and a half tops.
2. No one has ever rejected one of my pies. I can’t say the same for every novel or story or essay I’ve written.
3. Good writing disturbs, unnerves, or stirs questions–even if, by the end, it resolves. Pie is soothing, comforting.
4. I experience a lot of joy with writing–but also a lot of angst. By comparison, pie making is simple and comforting.

My writing and my pie-making aren’t entire separate, though.

If I’m stuck on a spot in my writing, I can always take a break and make a pie. There’s always someone who needs a pie! And often, in the rhythm of rolling out dough and stirring up fillings, or having a cup of coffee or tea while the pie bakes, I realize (or think I do!) exactly what I need to do to become unstuck in my writing.

And pie ends up playing a part in many pieces that I write, including THE WIDOWS, in which a buttermilk pie plays a role in bringing together the protagonist, Lily, and her husband, Daniel.

Pie of the month… but first, a crust recipe! 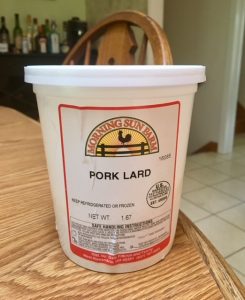 I can’t give, you, my readers, pies. But I can give you pie tips and recipes. So on this blog, I’ll have a “pie of the month.”

This month, I’ll kick off this blog category with a good basic crust. (I’ll get into other crusts later.) This crust is great for any pie–creme, fruit or savory. I suggest using half-lard/half-butter if you’re making a creme or fruit pie, and half-lard/half-vegetable shortening if you’re making a savory pie. A little less salt for dessert pies; a little more for savory. It’s a very flexible crust!

I’ve heard so many comments that it’s hard to make, but once you get the hang of it, crust is simple. The key, I think, is to use a ratio instead of a recipe, plus a few of the right tools and ingredients:

Here’s how to put the crust together (using the single crust amounts): 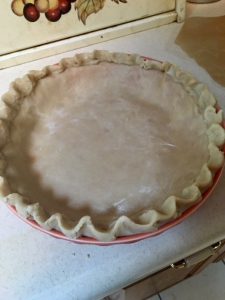 Repeat the parchment paper lifting/flour sprinkling/parchment paper replacing/flipping process a few times until you have a nice round disc, a bit bigger than the top of your pie plate.

After a few attempts, you’ll become a crust-making pro. I’m looking forward to sharing my favorite fillings in the months to come!

WANT MORE BONUS CONTENT, GIVEAWAYS,AND UPDATES? SUBSCRIBE TO MY FREE E-NEWSLETTER BY CLICKING HERE (AND GET EXCLUSIVE BONUS CONTENT FROM THE FIRST NOVEL IN THE KINSHIP SERIES)!