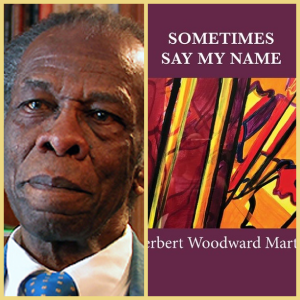 In this episode, I chat with Herbert Woodward Martin, renowned poet and librettist. He shares his wisdom, (“gamble with words!”), what he learned from THE Edward Albee (!!), and his answer to my question that he says no one has ever asked him before!

Here is a link to my interview with Herbert on my YouTube Channel: https://youtu.be/P9H_oA4b1ss

Herbert is the author of multiple collections of poetry including Sometimes Say My Name, the Shape of Regret, Inscribing My Name, and others, and is a scholar and interpreter of Paul Laurence Dunbar. His Dayton TedX talk provides additional insight into his work.

After earning degrees at University of Toledo and Breadloaf School of English, teaching at Aquinas College in Michigan, and publishing his first book of poetry, Martin became poet-in-residence and assistant professor at University of Dayton in 1970. Since then, Martin earned a Doctorate of Arts at Carnegie-Mellon University, published numerous volumes of his own poetry, has become a scholar on Dunbar and other, and has won accolades including a Fulbright Scholarship, the Ohio Governor’s Award for an individual artist, an honorary PhD from the University of Dayton, and many others. His most recent collections are “Sometimes Say My Name” and “The Shape of Regret.”

Herbert also has a successful career as a librettist, working with American composers such as Adolphus Hailstork on an opera, “Paul Laurence Dunbar: Common Ground.” He composed the text for “Nobody Know,” a concert aria by Hailstork and commissioned by The Harlem Chamber Players to commemorate the 400th anniversary of the first Africans brought to America as slaves and premiered by the Players in February 2019.

Most recently, he wrote the text for “TULSA 1921,” about the Tulsa, Oklahoma massacre of Black Americans in the Greenwood District of Tulsa.