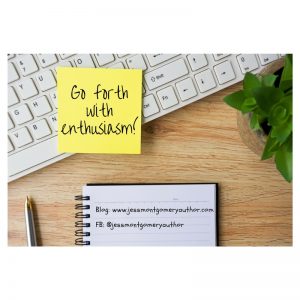 years ago, I had a well-paying, well-respected job as a marketing copy writer for a large corporation. I’ll admit it–I didn’t totally love this job. But I didn’t feel like Dilbert, either. I had a nice office, good benefits, kind colleagues–some of whom were (and still are) good friends. Even better, I’d negotiated for my job to be three days a week–perfect for juggling with rearing two small children and my dream work of novel-writing.

The only downside? Well, this corporation was renowned for its layoffs. Or right-sizings. Or whatever was in vogue at the time in corporate-speak for, “we’ve decided to make a change…” Usually, those layoffs came at the end of each October.

I’d survived nine years worth of layoffs, including one during a corporate takeover by another large company. But in October nineteen years ago, I went to what I thought was a routine marketing department meeting.

Except our marketing department manager wasn’t there. Instead, at the front of the conference room stood a person none of us recognized. She turned out to be a new representative from Human Resources. Once that introduction was made, she announced that she had an envelope for each of us containing information about options, next steps, nondisclosure agreements and severance. I still remember the colleague who was sitting next to me, turning to me wide-eyed to whisper: “Have we just been fired? I think we’ve all just been fired!”

But we hadn’t been directly fired. Or laid off. Or right-sized. We each had to apply for a job within the corporation before we could accept our severance. The only problem was that our function–marketing–had just been axed from the corporation, and would be outsourced.

I did my due diligence, of course. I applied for the position I was instructed to apply for–a sales position–for which I was wholly unqualified. In that interview, I didn’t even understand the terminology used in the interview questions. I asked the poor beleaguered interviewer (I think all 27 of my colleagues had also applied for the position) if it was necessary to continue the interview, given that I wasn’t qualified. She said yes, and continued to ask the questions on her list. I kept replying, “I don’t know.” (In that moment, I admit it, I DID feel like Dilbert.)

I didn’t get the job.

So now I had an actual choice. I could take severance–a few months’ worth of pay–or apply for another job as an administrative assistant. I wasn’t particularly qualified for that job, either, but it was one I could eventually learn (so I was told). My pay would be cut a bit, but at least I’d be employed. At least, until the next lay off.

After work, I came home, had dinner with my husband and our two kids. And then I decided to take a long walk, by myself. As I did so, I kept thinking, “what should I do, what should I do?” Declining the possibility of a certain year of employment seemed foolish. But I didn’t want to stay at the corporation, in a job I didn’t really want to do, and face the possibility of another layoff.

Suddenly, I had this thought. Or perhaps the good Lord, or the Universe, or whatever you want to call the small still voice that sometimes speaks to all of us, shared this thought:

GO FORTH WITH ENTHUSIASM!

I stopped in my tracks. Well, that seemed profound. But what did it really mean?

By the time I was home, I knew. It meant that whatever work I did, I had to embrace it wholly and with passion. I wouldn’t be happy and whole any other way. I had to go forth with enthusiasm!

I wrote that phrase down on a sticky note, and put it by my home computer. I took the severance, and put together a plan to do what I’d been wanting to do for a long time: launch my own local marketing communications practice. I made a list of thirty people to call. Three of them had work for me on small projects. From there, my business grew by word of mouth. I was steadily employed as a freelance marketing communications writer for nine years–until the crash of 2008.

But by then, I’d gotten adept at living by the mantra.

Oh, and by the way, my former employer? Well, that corporation became one of my steady clients during my freelancing years!

Every now and then, I look at that saying–now on a digital sticky note, as the original is long gone. And when I’m stuck in my writing or on another project, I take a deep breath (or a long walk) and remind myself: GO FORTH WITH ENTHUSIASM!