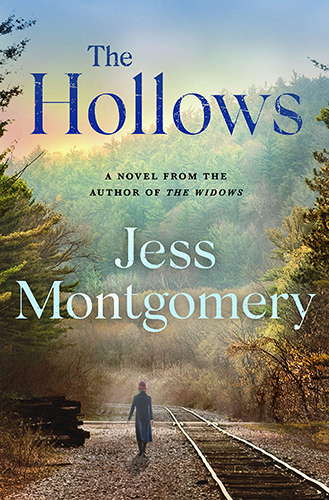 Book 2 in the Kinship series

Now available in hardcover and ebook

Jess Montgomery showcases her skills as a storyteller in the second in her Kinship mystery series. The Hollows is a powerful, big-hearted and exquisitely written follow-up to her acclaimed debut The Widows.

Ohio, 1926: For many years, the railroad track in Moonvale Tunnel has been used as a short cut through the Appalachian hills. When an elderly woman is killed walking along the tracks, the brakeman tells tales of seeing a ghostly female figure dressed all in white.

Newly elected Sheriff Lily Ross is called on to the case to dispel the myths, but Lily does not believe that an old woman would wander out of the hills onto the tracks. In a county where everyone knows everyone, how can someone have disappeared, when nobody knew they were missing? As ghost stories and rumors settle into the consciousness of Moonvale Hollow, Lily tries to search for any real clues to the woman’s identity.

With the help of her friend Marvena Whitcomb, Lily follows the woman’s trail to The Hollows—an asylum in northern Athens County—and they begin to expose secrets long-hidden by time and the mountains.

Read an excerpt
Join my Book Friends group on Facebook!

“A skillfully told murder mystery that features a rich array of characters and a sophisticated portrayal of a small town…. Despite such complex plots and characters, the novel moves along briskly without sacrificing eloquence in its prose. A satisfying historical murder mystery set apart by its compelling female cast.”
—Kirkus Reviews (Read more)

“Skilled storyteller Montgomery takes up the issue of racial prejudice as it existed in that place and time in this historical mystery that shines with its strong and appealing female characters.”
—Booklist

“Set in 1926 in the western foothills of the Appalachian Mountains in southeastern Ohio, The Hollows is much more than a murder mystery. It weaves racial integration, labor organizing in the Appalachian coal mines, prohibition and women’s rights throughout the narrative, set against an authentic backdrop crafted by Montgomery’s careful attention to historic detail.”
—AP Newswire (Read more)

“The exploration of emotional hollowness, its origins and expressions, adds layers to this story. Montgomery has written another suspenseful mystery full of atmosphere and surprising historical details.”
—Criminal Element (Read more)

“Montgomery manages to deftly weave together believable characters, dark historical truths, and an enthralling mystery. The result is genuinely mysterious and utterly satisfying.”
—Greer Macallister, author of Woman 99 and The Magician’s Lie